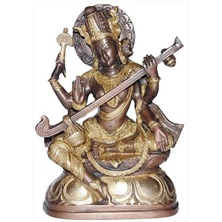 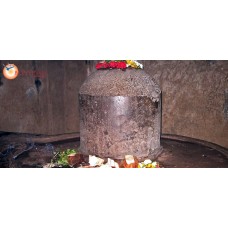 Now perform puja @ Kashi Viashwanath Bahgwan and get the blessings and prasad for just USD 250.

The frame of the cosmic reality, according to ancient Hindu thought, consists of the three fundamental states called evolution (Shrishthi), existence (sthiti), and involution (samhara) that acts in a cyclic process of infinity. Each one of the forms is controlled by a God, named Brahma (the creator), Vishnu (the preserver) and Siva/Shiva (the destroyer); these three Gods are called the Trinity. Shiva, being the last to complete the cycle from where the new cycle starts, is known as Mahadeo, the Supreme Divinity. The iconographic form of the Shiva, the Linga represents the unity of the three states of cosmos (shown in above figure).The Linga consists of the three parts. The first is a square base of three-layers at the bottom showing the three mythical realms (lokas), symbolizing evolution the place of Brahma. The second is an octagonal round form in the middle showing the eight directions, symbolizing existence or perseverance the place of Vishnu; and third is a cylinder at the top with a spherical end, symbolizing involution or completion of the cosmic cycle the place of Shiva. This icon shows the supreme state of integrity, the ultimate form of Shiva linga itself is a symbol of cosmic mandala. As Sadasiva (eternal reality) Shiva is represented as linga, standing also for 'total knowledge'. As Rudra, the destroyer, his consort is Kali. As Bhairava, the terrible destroyer, his consort is Durga. As a jovial god living in the Himalaya his wife is Parvati. As possessor of all forms of divine power Shiva rooms at the bottom of everything that is moving, that is how he is called Ishvara, derived from I-cara, i.e. I the centre, and cara, the rhythm of movement. Shiva is also depicted as cosmic dancer, Tandava Nartakari, the one who keeps up the rhythm of the world in cosmos.

Note - as cameras are not allowed in the temple, proof of start of puja and end of puja will be shared along with prasad.